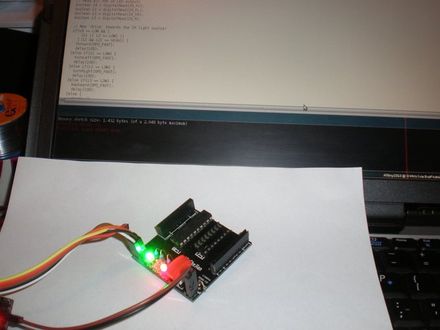 Once you have written you code, it has to be compiled and uploaded into the SwarmRobot microprocessor. Note that writing your code is often called programming AND that uploading the code is also called programming! But these are two very different activities!

The first coding (programming) activity involves writing the commands that the microprocessor will execute. This is done on a computer, then the code is compiled (converted to binary format that the mocroprocessor understands).

This binary code is then uploaded to the microprocessor through the the second process called programming or 'burning'. Uploading the code requires a hardware device that does the programming. In some configurations this programmer is built in to the system.

Note that most Arduino systems have a built in ability to self program, using a self loading ability through bootloader code in the microprocessor.

The AtTiny microprocessor used for the SwarmRobots require using an ISP programmer, as specified in the parts list.

To write your code and upload it to the SwarmRobot microprocessor, you need to install the Arduino environment and add additional files to configure it for using an AtTiny. These steps are described in the following sections.

Sample code for the InfraRed and follow/avoid shields is in this repository SwarmRobots github.

If you want want a copy of the source code, just click though in your browser, then copy the code to the Arduino environment.

However you are strongly encouraged to spend a little time to share your code back with everyone. You can quickly learn how to do this through these introductory links to using the github source repository:

The Arduino site has excellent documentation on installing the Arduino development environment for many different operating systems.

There is also a trouble shooting guide and the excelent support in the forums.

To program an AtTiny using the Arduino Extract the contents of the archive into the "hardware" folder, an additional AtTiny cores library is required.

The source code repository for the library used in the SwarmRobot project is located at: [1]

Then unzip the downloaded file and read the instructions in the file "readme.txt" to install the library.

Please note the instructions have not been updated after the step "Extract the contents of the archive into the "hardware" folder", but luckily, this is the last step you need to do!

After completing this step, make sure the Arduino environment is closed, then open it and check the Tools-Boards menu to see a long list of AtTiny microprocessors have been added.

Note next is from http://hlt.media.mit.edu/?p=1695 However please note that as mentioned, by default, the ATtiny’s run at 1 MHz (the setting used by the unmodified “ATtiny45″, etc. board menu items). You need to do an extra step "Configuring the ATtiny to run at 8 MHz (for SoftwareSerial support)" to configure the microcontroller to run at 8 MHz – necessary for use of the SoftwareSerial library. Once you have the microcontroller connected, select the appropriate item from the Boards menu (e.g. “ATtiny45 (8 MHz)”). Then, run the “Burn Bootloader” command from the Tools menu. This configures the fuse bits of the microcontroller so it runs at 8 MHz. Note that the fuse bits keep their value until you explicitly change them, so you’ll only need to do this step once for each microcontroller. (Note this doesn’t actually burn a bootloader onto the board; you’ll still need to upload new programs using an external programmer.)

The AtTiny cores do not support all Arduino IO commands. (Does anybody know which comands are not supported?)

The following {(IO hardware related)} Arduino commands should be supported:

Uploading your code to the AtTiny

Connecting your ISP programmer to the SwarmRobot

Make sure you use an ISP programmer with 6 pin connector to match the SwarmRobot.

The famous [LadyAda has instruction on making an ISP programmer using an Attiny2313], but you will need some more parts.

There are many more web sites documenting how to make other simple ISP programmers.

Open the sketch you wish to load into the SwarmRobot in the Arduino GUI development environment.

In the Tools - Board list, Select the AtTiny2313. If it does not appear in the list, please review the instructions above "Configuring Arduino environment for AtTiny"

Then whenever you wish to upload the code to the AtTiny, select the File menu, then "Upload using Programmer"

If you use [USBASP ISP programmer] as we did, in Windows 7 you may need to install a driver for it. Use instructions [[here] to download a driver and install.

then you need the driver.

Additional information on the programmer we used:

Using an Arduino as the ISP programmer

An Arduino system can also be used as an ISP programmer.

To use an Arduino as a programmer to program the microcontroller selected for our project, the ATtiny2313.

Upload this [sketch] to the Arduino (Uno, Dueminalove) from Arduino IDE.

(see attachment .zip for the folder)

Connecting the Arduino to the ATTINY2313

Connect the Arduino to the ATtiny2313:

Uploading a program to the ATtiny2313

So to make sure all time dependant code is accurate, the default divide by 8 needs to be changed.

There are two ways to do this:

After the fuse has been change the jumper is no longer required on the USBasp ISP and the AtTiny can be programmed at full speed.

Use this as a reference:

Sample code for the InfraRed and follow/avoid shields is in this repository [SwarmRobots github].

This code has comments included in it that describe what the code is doing!

If you have never used any source control system before or are not familiar with programming, then the recommended way to get all the source and compiled binary files is to just click on the "ZIP" button at top left of the screen.

Then after the download completes, unzip the files. Use one of the several README.md text files to get information of which directory and file is which!

If you want want a copy of the source code, just click though in your browser, then copy the code to the Arduino environment.

However you are strongly encourage to spend a little time to share your code back with everyone. You can quickly learn how to do this through these introductory links to using the github source repository: