Bragging rights, well deserved, the winner of this years Autonomous racing championship is EdwardRF with his entry XHD, a 10 second car that flew around the track, sticking like glue to the ground, nimble and hightech in one. 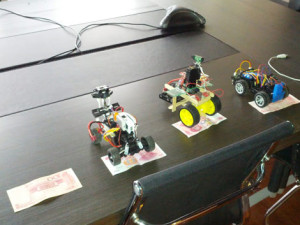 5 competitors competed for best time in time trials on the track for 2012, but only one would win. first up on the track was “Icecream Breaker” which unfortunately didn’t make it off the starting track.

The second contestant was Charlie “wallbanger” famed for it’s uncanny desire to hit every wall in the past, for this year it had an upgrade, 2 Sharp IR range sensors a powerful microservo, a high current motor driver all on top of an arduino nano built right into the original platform, he was no longer a wallbanger but a high powered racing car which clocked in at 7seconds in testing on the same course but different surface. Charlie set the time to beat at 14.62 seconds 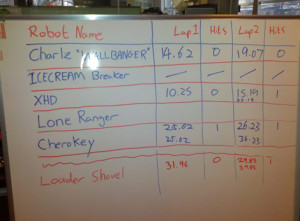 XHD time to roll around, with a tough 14.62 seconds to beat, it started out on the track for 1 flawless lap, unfortunately the second lap was not as great, but it did clock in at 10.25seconds. this was the highest tech vehicle to race, PID controllers, wickedly expensive racing platform, 3 Sharp IR range sensors, 1 nano, 1 703n, 1 micro servo, 1 high power motor for the quad wheel drive-shaft with differential driving allowing it to take corners like no ones business.

With a little intermission Cherokey was ready to try again, this 4 wheel drive platform from dfrobot needed a little more time to work out the bugs but it was a great start, it could turn 360° on the spot! equipped with 4 Basic IR sensors, 4 powered wheel drive shaft and a nice base, unfortunately it’s fastest time on the track was 25.02 seconds with 1 collision making it 35.02 seconds. 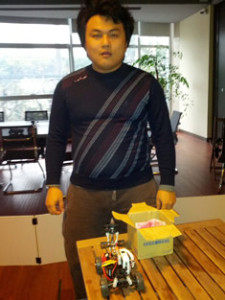 With man behind the wheel in the only entrant into the User controlled group Stanley clocked in with Loader Shovel with 31.96 seconds, not a good start for human controlled. anyway he won by default.

Lio finally entered in with the Lone Ranger – unfortunately time and a new platform didn’t work out for him, it was a good show of walloping wall-banging!.

in winner takes all, EdwardRF took home the prize of 500rmb :) congratulations to EdwardRF, if you would like to challenge him, make sure you have a 10 second car or you’ll be paying the price of loosing to the champion.