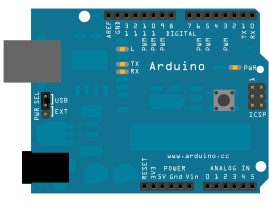 We use Arduino because:

Arduino and its development environment are ideal ways to learn both programming and how to interact with the real world.

See the Introduction to Arduino on the official Arduino page.

This is an introduction to programming written by Spencer. This guide will teach you the basics of programming, as well as get you familiar with the language used by the Arduino.

This is an introduction to the Arduino written by Paul. This guide will get you familiar with using an Arduino in conjunction with a breadboard and some basic sensors and outputs.